Knowing When To Break The Rules

It’s been a big few weeks in the market and I expect more of the same in the near term.

I only received one email during this time. I’d like to think that I’ve been able to help our members understand the realities of volatility, staying non-emotional and also focusing on the long term rather than the bumps along the way.

It is, after all, a bumpy road to out-performance. Below is the Growth Portfolio performance since public release in 2006. Plenty of bumps; the most recent is within the realms of the others.

The context of the email was that several other ‘named’ traders exited before the rout and saved considerable pain. They used their discretion to read market conditions, in this case correctly.

“Ed Seykota is known to have “know when to break the rules” as one of his rules. My interpretation of this is that trading, like life, is gray. Trend following without analysis or thought is very black and white. I think operating in the gray is very important to success.”

In some respects I agree.

For example, on Friday 28th February I de-levered my short term Mean Reversion systems. That decision cost me money, but it was more about survival. Being highly levered into what could have been a 1987-repeat was a common sense decision.

However, making a decision to override a system has its downsides, especially for the emotional trader. And let’s face it, a highly emotional trader is the most susceptible to making regular strategy changes on the fly.

A single override decision may not break the strategy.

But discretion can slowly make its way into the decision making process more and more until the original system looks very different. A trend trader will cut profits. A short term mean reversion trader holds longer term. Leverage gets switched on/off on every blip.

Below is an exaggerated example.

The ‘System’ is my day trade strategy tested on a random 5000-day window. It uses leverage every day. 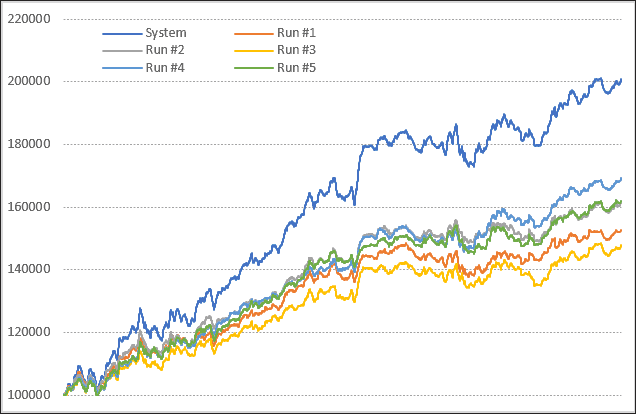 I say this is an exaggerated example because it assumes the trader will use discretion 50% of the time. In the real world that’s probably extreme…or maybe not.

But even so, it does show that ‘more often than not’ breaking the system rules will dilute the return profile. Yes, it’s a grey area, but if you find yourself doing it on a regular basis, then you’re experiencing discretion creep.