Long term readers know that I spend a lot of time researching ideas for either improving existing strategies or looking at new opportunities. One of my recent projects has been looking at following trends using a market neutral strategy.

Market neutral means attempting to profit from both increasing and decreasing prices while attempting to avoid a specific form of market risk.

In layman’s terms, if we follow trends in equities on the long side, we have the potential risk of being exposed, at least to some degree, if the market collapses quickly. Yes, we can go to cash but that will still result in some profit giveback and drawdown.

So is there a way to profit from riding trends without worrying (too much) about a broader market collapse?

Your immediate thought may be; yes, trade trends on the short side.

Two issues with that.

Firstly you still have exposure to the broader market. Think about what’s just occurred in the last few weeks – equity indices have roared higher. Short positions would have been reversed with profit giveback or some level of drawdown.

Take a look at the following two charts; Biomarin Pharma (BMRN) and Flowserve Corp (FLS). The first was trending down for a time, then up before getting hit by the March collapse. The latter also got hit in the March collapse but is struggling to recover. 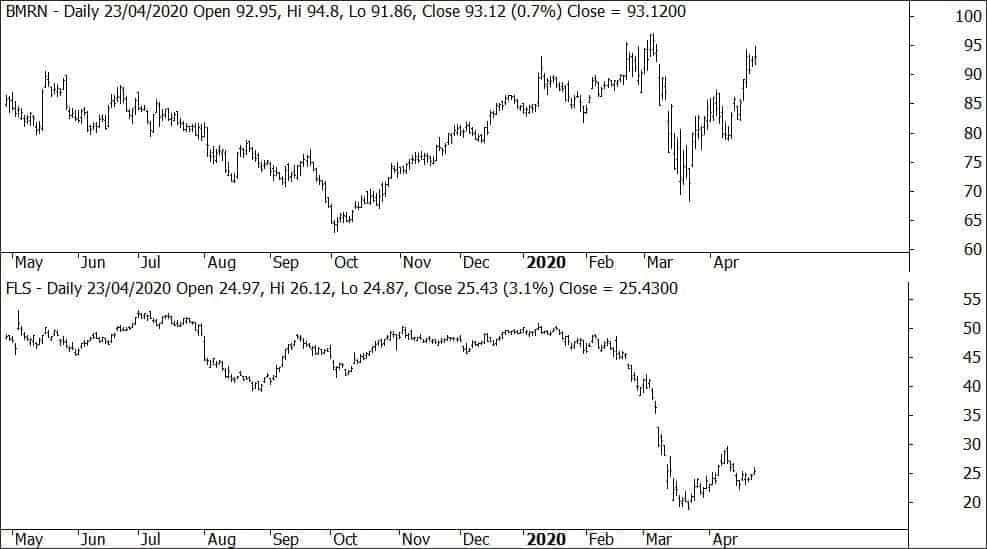 The next chart is a synthetic position. A synthetic position is one constructed of different elements, specifically it’s the ‘spread’ between the two stocks above. These spreads are sometimes referred to as ‘pairs’.

Normally pairs are traded when the two instruments are highly correlated, such as buying BHP and simultaneously selling Rio Tinto. The goal is that when their paths diverge positions are taken opposite that divergence in the expectation that their paths will return to normal. The problem is twofold; profits tend to be razor thin and secondly if the correlation fails to normalise, large losses could occur. In many instances ongoing divergence suggest adding to an already losing position. Never a good thing.

But that’s not what I have been researching.

Instead I’m looking for sustainable trends in these spreads, and as can be seen from the above chart these trends can be quite smooth and clean. Note the March selloff really didn’t impact a great deal on the trend. It paused, then resumed.

And that’s the crux of being market neutral.

We’re still open to individual stock risks, but we would be anyway trading naked longs or shorts. Trading the trends in spreads between two instruments provides the same skew as traditional trend following; cut the losses and let the profits run.